The Stones of Stone Lane in, er, Stone (near Todmorden)

These standing stones are almost unheard of, but one of them must be amongst the tallest of menhirs yet to be discovered by the masses.
We began our search on a fresh and bright Sunday in September. Heading for Todmorden with our trusty battered old O.S. map and Paul Bennett’s inspirational guide to the stoney goodies of West Yorkshire - 'The Old Stones of Elmet',

we had little idea of the beauties that awaited us!

The map doesn’t actually show the position of the stones, but the settlement of ‘Stones’ has a ‘Stones Lane’, so we reckoned that they couldn't be too hard to locate!

Thinking we’d worked out a short-cut through Gauxholme, we soon found ourselves heading up the precipitous valley-side at an alarming angle, on an unfeasibly narrow lane! The tiny road petered out and became a rough, rubble track. With my car’s exhaust scraping the uneven surface and my suspension taking a severe pounding, we finally reached a dead-end. About to attempt to turn round and begin our descent we caught sight of something on the near horizon.

‘Is that a standing stone?’ 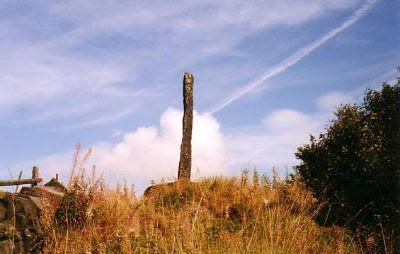 We couldn’t tell what it was from where we were. It looked like it could’ve just been a dead tree-trunk in the hedgerow, so we decided to re-read the directions given in the guidebook. We barely noticed the tiny flock of sheep that approached, hastily followed by an old farmer, who eyed us up suspiciously. I asked him if he knew of any standing stones nearby and he said that the thing we'd seen was one. He graciously gave us permission to cross his field to photograph the monolith.

It was a curious thing! Standing maybe twelve feet high, rather slim, with what looked like holes bored into it for attaching gate hinges. Maybe it was just an old gatepost that had been moved there? It sat on a large circular stone too, like a mill-stone. Not very 'natural looking' at all...
According to the 1912 geological survey map of the area, there was no stone here, it’s reckoned to have ‘appeared’ there sometime between 1912 and 1921. Perhaps it was moved there to replace a missing stone? The mound on which it stands is called Centre Hill, but is also known as Beacon Hill, showing it’s use in times past.

After taking a few photographs we returned to the car to get a grid reference for the other stones. We didn’t have to bother though, as a friendly resident of the neighbouring house came out and told us where the others lay.

Just to the west of Centre Hill, in the adjacent field, stood the tallest and most impressive of the group. Again, a good twelve feet high. 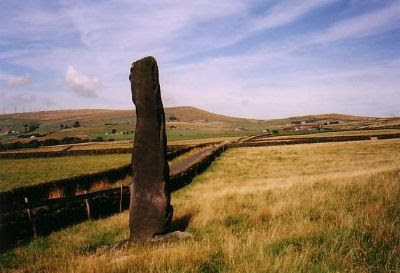 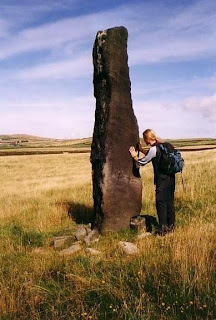 This one had a ‘prescence’ that it's spindly colleague lacked. A much more ‘self-assured’ stone! I noticed faint markings at head height and wondered if they could be old, weathered letters. They were far too indistinct to make out for sure though. 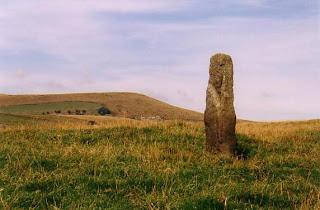 Walking north-west up Stones Lane we found the next monolith. Sitting in a field to the left, only four-and-a-half-feet tall, it would have been easy to miss it, camaflouged as it squats near the dry-stone wall. 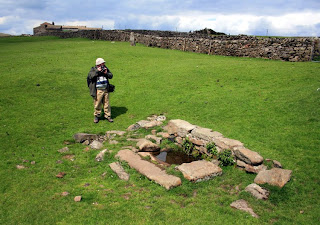 Bennett wrote that this stone once had a brother, which was still standing during the early 1950s, but isn’t today. However, at the point where the older maps show where it used to be, there now lies a spring. A trough of stones had been arranged around the opening and there lays a stone, about five feet long, said to be the lost brother-menhir. Today it forms part of the ‘basin’ that holds the spring water for the livestock.

Livestock that needs to be extra alert these days! According to reports in the Northern Earth journal, a 'large, black feline' was spotted wandering around the West Yorks/Lancashire border shortly before our visit...
Reported to be 'about half the size of a sheep, with a thick rounded tail', it was sighted 'near the standing stone, at Stones'.

The story prompted another sighting from 3 weeks before at Walsden, another 'long-tailed' black feline, '3 or 4 times bigger than a domestic cat'. Following this were 2 sightings near an animal sanctuary at Blackstone Edge (both by the same woman). Luckily for us, the beast didn’t make an appearance during our visit…

Alien Big Cats notwithstanding, we made a return visit, mob-handed, and found a rather cool 'celtic' carved stone head adorning a nearby house:- 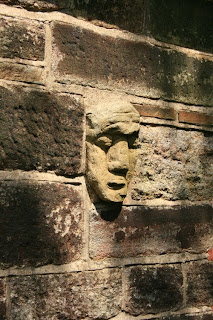 And one of our party pointed out an 'anti-witch' device on the top of an old farmhouse. According to local lore, these embellishments are useful for preventing 'witches' from landing on your roof! 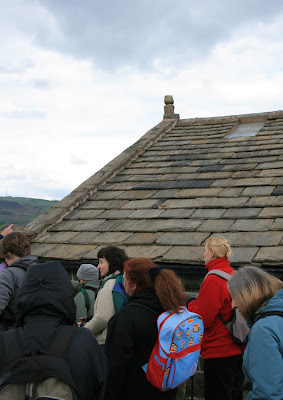 I think it's likely this area holds many more secrets and oddities and is worthy of additional exploration... watch this space!
Posted by David Raven at 12:05