The Black Horse Of Bush Howe

The first time that I came across the almost mythical 'Black Horse of Bush Howe' was at the impressionable age of fourteen, in a book entitled 'Brigantia'

written by Guy Ragland Phillips. In the book he tells of an ancient and forgotten hill figure, cut into the inhospitable slopes of a remote valley in the Howgill Fells. The figure, reminiscent of the horses carved aeons ago in French and Spanish caves was, he said, evidence of a surviving 'Dobbie Cult'.

A 'Dobbie' doesn't seem to be a horse though. He describes it as a 'big, black horrible misshapen thing that slips about', which if glimpsed at all it's more likely seen out of the corner of your eye, before it vanishes. They are usually to be found by bridges or fords, waiting to accost the hapless traveller. Some of the older houses around the nearby village of Sedbergh, such as Bleaze Hall and Copplethwaite Hall have their own 'dobbies'.

For me the strangest part of the tale was it's inconclusiveness. Apparently, the locals can't decide if it exists or not! Philips asserts that not one mention of it is made in any of the guidebooks describing the Howgills and surrounding region.

The comedian, writer, folk singer and keen walker Mike Harding lives in the area and I emailed him to see if he knew anything about the hill figure. He told me that it's called 'The Black Horse of Busha' locally. He had heard of it's existence and gave us an idea of it's whereabouts, but said he'd never seen it himself.

The only likeness of the figure we could find was a sketch in 'Brigantia’:- 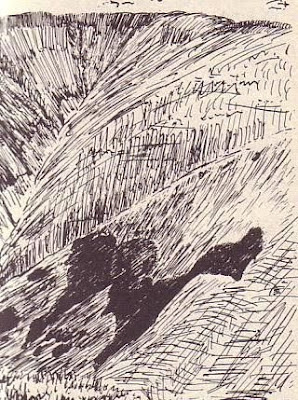 Guy Ragland Phillips made five visits to photograph the black horse. All failed. Mists that descended as he tried to take a suitable shot scuppered his first trip. On the second occasion he used up a whole reel of film in hazy sunshine. Not a single picture came out. His third attempt yielded just 'three very misty' pictures; the fourth was a 'complete washout'. His fifth try was along the valley bottom, following Long Rigg Beck then climbing White Fell. The instant he tried to take a photograph the slopes clouded over. From that point onwards the weather was against him. He walked over to the top of Bush Howe and made a descent to where he thought it might be. After a slide down the hill on his rear he found himself on the Horses 'head'.

'There was nothing whatever to see except a waste of black stones, the dark Silurian shale of which the Howgills consist. No shape at all could be distinguished. The horse had slipped from my grasp at the last second ' he wrote.

He paced out the extent of the stone, finding it to be 140 yards long and 120 yards high.

He also wrote also of a thwarted Inspector from the Ministry of the Environment who, try as he might, couldn't get a decent photograph of the Horse.

So, with curiosity aroused a trip to find it was planned...


An unusually warm spring day, and an old friend with an interest in all things weird had volunteered his company for a hike around the hills. 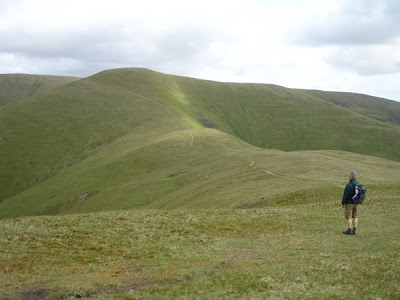 The fog burnt off in no time making the ascent of 'Winder' a sweaty slog, not helped by the previous nights excesses of beer and take-aways! Once on the tops a chilling breeze had us putting layers back on, but made the next two summits less demanding to reach. 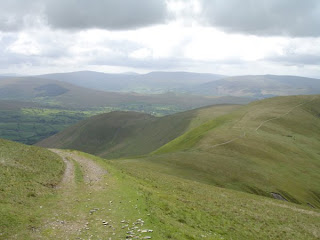 On reaching the 'trig' point on the top of 'The Calf' the smooth grassy slopes spread out all around us, like a vast parched wilderness. No cars, no kids, no airplanes, no man-made noise at all! Just the wind through the grass. The summit of Bush Howe was clearly visible in the distance. After a hasty snack we set off at a run; rain clouds and fog had begun to appear on the horizon in the west, moving up the valleys towards us. 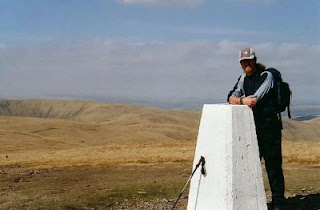 We knew that the conditions could change in seconds up there, leaving no chance of finding anything. We rushed along the indistinct path to the peak of Bush Howe...

Wandering the hill aimlessly it would've taken an age to cover all the ground. We needed to view the slopes from the west, like Phillips had. The ridge went north before continuing around to the west, over Breaks Head to Fell Head. We ran as well as our packs would allow, all the time watching the fog and cloud creep slowly up the valley. We couldn't see anything that even vaguely resembled the sketch in 'Brigantia'.

The mist and cloud seemed to be stuck momentarily at the bottom of the valley. We had almost reached the end of the ridge when we spotted a large indistinct grey patch on the slopes of 'The Height of Bush Howe' (the hill adjacent to Bush Howe)...

It was the Black Horse! 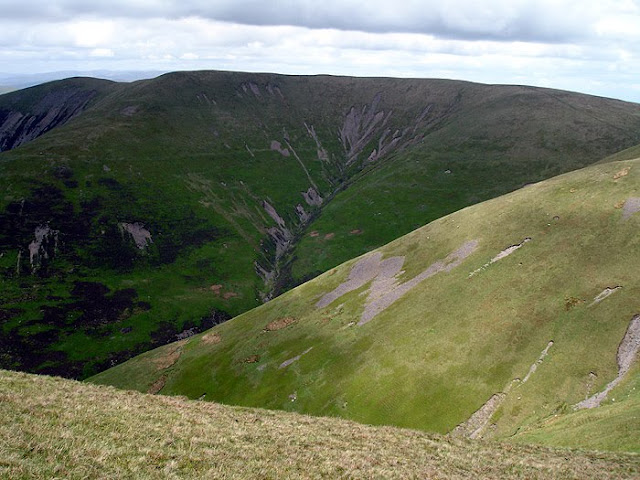 Unfortunately the slope was at such an angle that it prevented us from getting a clear photograph. We needed to get back to the other side of the valley where we had been originally. We consulted the map to plot it's location - the appropriately named 'Stranger Gill'! The clouds were now dark and ominous. We didn't think we'd make it in time...

The trek back seemed to take forever. As we neared the top of White Fell Head I could see the shape clearly and I started to take shots at a frantic rate, hoping the rain would hold off. Reaching the summit we collapsed, threw off our rucksacks and took as many photographs as we could. Some of them had to come out!

Unsure if we had long before an imminent cloudburst, I volunteered to climb down the sides of 'Stranger Gill' to the figure, so that my friend Bill could get a few shots with me in them for a sense of scale.


The closer I got to the figure, the harder it was to discern where it was! Before I knew it, I was standing on the Horse's 'back'.
The shape didn't seem to be cut from the thin moorland turf. It appeared to be a layer of evenly sized rocks placed on the surface. Thinking back, I don't quite know what I'd expected to find. Something more clearly defined perhaps?
Was it just naturally occurring scree or was it man made? 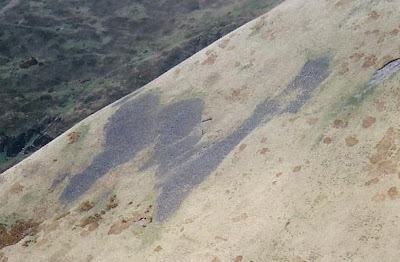 That tiny vertical line on the figure's back is me; waving!


It's origins weren't the only things I found fascinating. Phillips said that the fact it was almost unrecorded was like a 'conspiracy of silence'. However local tradition tells of it's use as a landmark for navigation by smugglers on Morecambe Bay some 20 miles away. From where I sat on the Horse's back I could see the still waters of the bay shimmering in the sun.

Phillips also quoted an old poem reputedly from the Celtic kingdom of Rheged, the frontier of which lay somewhere near the hills in which the figure is found. The poem contained details of 'Du y Moroedd', or 'Black Moro' ('the black one of the sea') one of the three horses of Britain. He goes on to refer to the Welsh Triads describing an invasion of north Wales from the north, probably Cumbria, connected with this horse. The beast carried seven men from 'the Benllech of the North' to a place on the coast of Anglesey also called Benllech! He proposed this 'Benllech of the North' to be Bush Howe. He reckoned that a line could be followed, like a 'ley' right down the Long Rigg Beck valley and across the sea to very near Benllech in Anglesey! Hmmm! I couldn't quite see that far...

So, it does seem as if it was known about in times past.

Enjoying the solitude of the empty valley and the warmth of the afternoon sun, I sat awhile before climbing the steep track-less hillside back to my colleague. As I passed the 'head' of the Horse I stopped, picking up three small stones as a small keepsake. Placing them in a pocket I turned to go. I took a dozen steps and stopped. It didn't feel right somehow. I threw them back.

Down on the slopes of Whin's End, three wild black Fell ponies watched as I made my way back to the summit of White Fell Head. 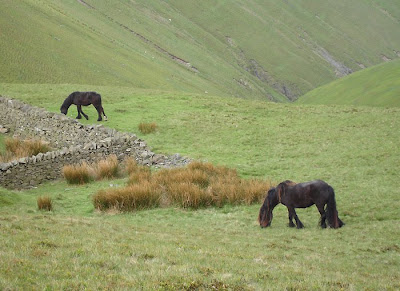 Back in Sedbergh, enjoying a pint in a pub beer garden, relaxing in the last of the days sunshine, I recalled the sense of wonder I had felt reading of the Black Horse as a teenager. Over half my lifetime ago.

It's there. It is real. I still don't have a clue what it is, but I found it, eventually... 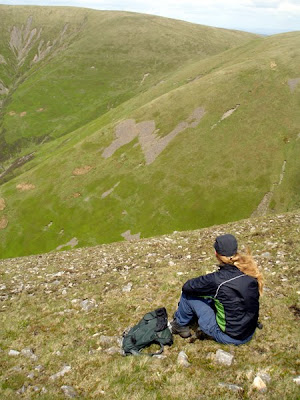 Since our trip I've received an email from Joyce Scobie; the Chairperson of the Sedbergh and District History Society. She wrote:-

"... school children in Howgill in the 1930's and 40's were given a day off every summer to go up and trim it to maintain the shape of a horse."

To me this lends some credence to the idea that the figure could be an artificially constructed hill figure, or more likely, a modified patch of scree that has been sporadically managed. Ms Scobie also told me that she was given this information by an old lady in the village (now sadly deceased) who remembered doing this in her childhood.

I also spoke on the phone to Jack Dawson, village elder and former JP, a man of excellent reputation in the local community. He told me of a local legend that he first heard 80-odd years ago, that described how the Roman legions used the horse as a landmark as they travelled up the Lune valley, from Lancaster to Penrith and Carlisle.

He recalled the pre-war practice undertaken by local farmers of what he called an annual 'Boon Day'. A day off from work to meet at the hill-figure and redefine it's shape. If the hard-working hill-farmers thereabouts were bothered enough to have a day off to do this, surely this is an indication that the figure used to have a degree of importance to the people in the area?


Mr. Dawson also spoke of his concerns for the continuing care of the hill figure. Given it's obscurity and the fact that it's relatively unknown, even by many local people, it's future appears uncertain...